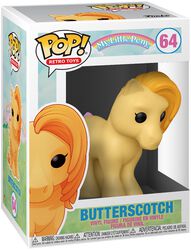 "My Little Pony" isn't simply about magical beings, it's also about friendship and of course, little colourful ponies that have become one of the most popular collector's items ever. Can't resist their cuteness? Even if you're not the biggest fan, My Little Pony is timeless and just brilliant. Stock up to your heart's content with My Little Pony merchandise on the EMP Online Shop.


The "My Little Pony" brand has been selling since the early 1980s, and its ponies are unmistakeable: they have fur, manes and come in every colour of the rainbow. Which one is your favourite? White ponies with and without rainbow manes and pink ponies tend to be a fan favourite, and each pony has different preferences and characteristics. Earth ponies have a strong connection to nature and other animals, whereas unicorn ponies possess magical abilities and some of the others can even fly or influence the weather. "My Little Pony" has a whole load of magic!


Little stars from the TV - My Little Pony merchandise

The magical ponies are so popular that there are now a number of their adventures shown on TV and in film, making My Little Pony an indispensable part of pop culture. In 2010, the TV series "My Little Pony - Friendship is Magic" was aired and the ponies are just as popular as they were when they first appeared 20 years ago. Ponyville brings you a bundle of friendship and magic thanks to Twilight Sparkle, Applejack, Pinkie Pie, Fluttershy and Rarity. Take a trip with them and share some exciting adventures!


Previously just figures, now fans are able to revel in a wide range of My Little Pony merchandise, and it's all available at the EMP My Little Pony Shop. Take care of your fan heart: t-shirts, bed linen, mugs - you'll find it all!


And the best thing about it all? The EMP My Little Pony Online Shop is always open, so you can order your favourite merchandise whenever you fancy. Take a quiet browse through our merchandise and have fun!


Can't get enough of the amazing merchandise the EMP Online Shop has on offer? Take a look at Sesame Street and uncover the best merchandise from Elmo, The Cookie Monster and the rest of the crew!